EffiMat Storage Technology A/S makes solutions for storage and process optimization, they would like to help make up the myth that robots will take over work. Robots and automation can reduce the time spent on manual tasks, whether they handle small print plates or larger and medium-heavy components. This means that products get faster on market, which is crucial for competitiveness and growth.

– The process change, which is to introduce robot-nets, ensures efficiency, and so awaits growth. By this, the companies can employ those workers who can help to get the development to continue, says Palle Maschoreck, Head of Sales and marketing at EffiMat Storage Technology A/S. 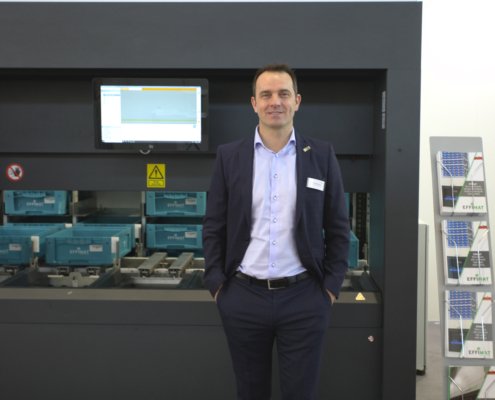 Most companies have gradually taken advantage of robot cells or partial automation, but the same companies continue to spend up to 50% of their resources on internal logistics, such as handling sub-components between work stations. Here, Effimat Storage Technology A/S has developed a solution that simply and efficiently removes manual processes, reduces duplication of workflows, and removes picking errors that later will become costly if the error is discovered too late.

At EffiMat Storage Technology A/S, they help companies find ways to optimise both in stock and in production, including automating picking systems, increasing speed and minimizing the error rate.
– Our products and advice are solutions to many of the warehouse, logistics, and production challenges companies face in everyday life, says Palle Maschoreck.

Labour is in short supply

And although many may have feared the entry of robots into production, there are already problems with recruiting workers to the monotonous and heavy jobs.
– In the automotive industry, which is one of the industries that use our solutions, we generally see a high average age among employees out in production, and it is difficult to get young people into the industry. However, the picture changes, when the robots get on the pitch, the young Industricians follow, says Palle Maschoreck.

Let the robots give a hand

Robot cells have been used around the industry for many years, but the new is that companies start, in the production, to look at how to automate the manual processes which is between the robot cells. Nowadays, there are many who do not produce to stock, but directly to orders, and here mistakes can cost dearly. This applies, among other things, to the automotive industry, where many of the luxury cars are produced according to individual demands.

– In fact, it happens several times a week that there are faults on the cars. It can be a side mirror which should have been anthracite gray, but the car is mounted with a light gray, or a steering wheel, which got white stitching instead of the ordered red, says Palle Maschoreck and elaborates:
– It costs that the fault is often discovered only when the car is trilling off assembly line and towards the end user. Here, an automated solution can minimize the errors, pick the correct parts in the kitting area and bring them to the assembly at the exact moment they are to be used.

The robots consume production and storage

EffiMat Storage Technology A/S offers the technology to business and it minimizes not only errors but streamlines the workflows, because employees should not go back and forth between the kitting area and the place where the car is assembled. The robots can not only be used to pick parts, but can also prepare sub-components for the next step in production.

The robots have the advantage of being agile and can therefore, very quickly, accept new tasks when production is to be made. It is not only in production that robots can make a difference, also in the warehouse they can help to improve efficiency, ensure better visibility and better use of space.

Learn more about how EffiMat Storage Technology A/S can optimize your business by contacting our salesteam or have a look at one of the projects we have done with Gibotech.