Expand the facility and hire more people or optimize the processes of those employees who already works in the warehouse – that was the challenge Dan Wax, Director of Supply Chain & Logistics at OFITE, faced when OFITE was growing.

Dan’s work ethic has always been to look for better ways to get work done and use the space wisely, that is why his thoughts fell on automation. The original plan was to go with a traditional Vertical Lift Module (VLM), but then he bumped into the EffiMat® at the ProMAT show.

To say that I was impressed may be an understatement. I was impressed to the point that at the end of the day I drug one of the competitor’s salesmen to the EffiMat and asked if their machine could do the same.

OFI Testing Equipment is a Houston based company providing instruments and reagents for testing drilling fluids, well cement, completion fluids, and wastewater.  The company is more than 30 years old and provides service all over the world.

They strive to be the most innovative in the market to provide the best products and solutions to the customers.

Prior to the EffiMat®, OFITE had 8 people pushing carts up and down the aisles as if they were in a grocery store, to pick sales orders and work orders. In some cases, people were waiting for an aisle to clear so they could get the parts needed. It was the same only in reverse for restocking the inventory every morning.

Instead of adding shifts or expanding the building, OFITE wanted to incorporate automation. The practical answer was to use the current space wisely, which meant going vertical.

One of the main thoughts were choosing a traditional Vertical Lift Module, but a VLM presents an entire row of parts, with the possibility of only one needed product. By presenting at least 5 needed parts at a time, OFITE saw how they could be more efficient and much more accurate. That is why they ultimately chose the EffiMat®.

Solving challenges often involves employees and their work processes. It is commonly known that people have a tendency of being resistant to change, which meant that convincing them also was a part of OFITE’s process. OFITE visisted other sights with similar solutions to show employees how efficient it could make them and how it could improve the working environment.

Moving away from the traditional

Today the EffiMat® at OFITE is used for storage and handling of smaller and expensive parts inventory. The inventory is used to fulfill direct sales orders and work orders for internal use to build finished products and is interfaced with the ERP system for order processing. Currently they have 3000+ part numbers in the EffiMat®.

The EffiMat® is operating with 3 people, which means that OFITE has been able to allocate people to do other tasks. Further they have gained a great amount of open floor space, which is used for staging of large orders and general work space.

But the result has turned out to be hot just efficiency and cost savings. It has had a derived effect and the EffiMat® has become an essential part of the company.

It is rewarding to observe the salespeople as well as the CEO tour customers through the facility and one of the stop-off points is the EffiMat®. It wows people.

For more info or a specific inquiry 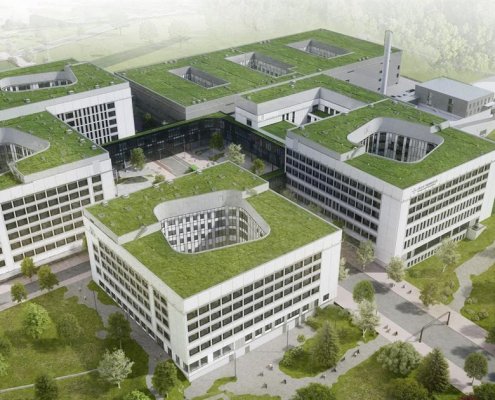