Ejner Hessel A/S in Aarhus, Denmark, has built the biggest and most advanced Mercedes-Benz center in the country. By integrating storage robots as the essential driving force behind the storage of spare parts, Ejner Hessel A/S has been able to fulfil their ambition of a large scale showroom and a highly efficient customer service.

The storage robots has been integrated with the DMS system of Ejner Hessel A/S, which provides a much easier access to the utilized parts and a better overview over the stock, due to the fact that it is now possible to plan a flow of spare parts.

The automation of the storage of spare parts has given rise to significant advantages in terms of a more ideal communication between the workshop and the store of spare parts, a reduced amount of time spent, a space requirement reduced by 85%, along with a 99,9% securement of warehouse control and precision. 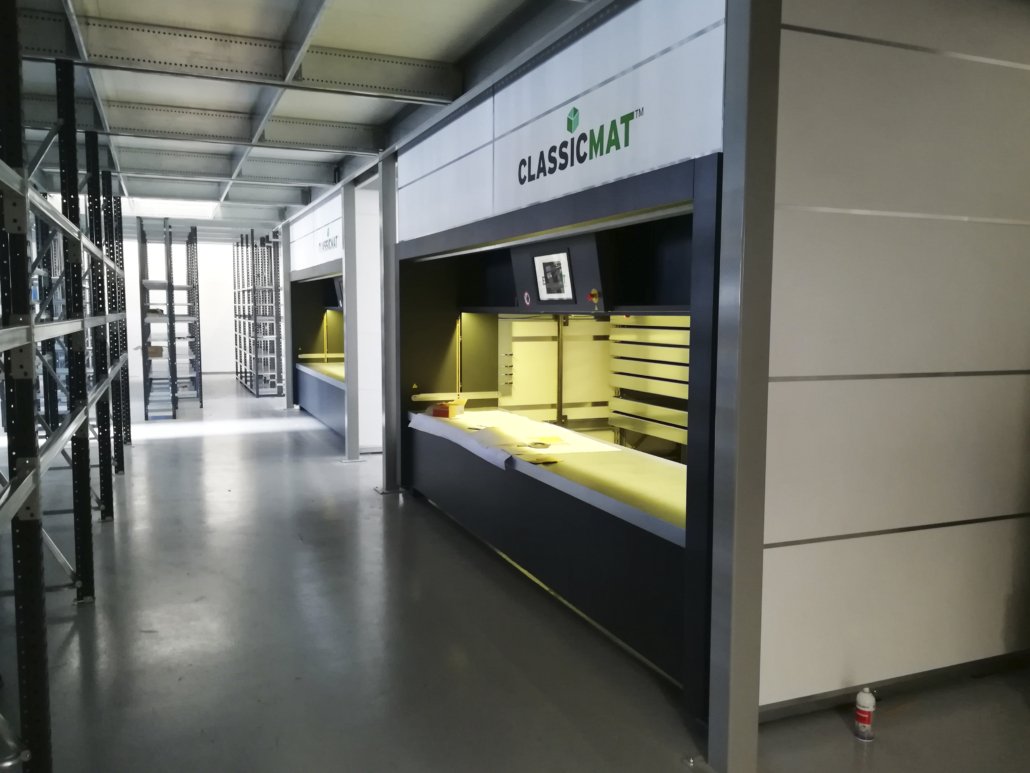 Integrated and efficient storage solution for the digi-tech workshop

When Ejner Hessel A/S chose EffiMat Storage Technology A/S to develop the ideal storage solution, the process began with an analysis of the needs and the internal flow of the auto repair shop and the warehouse, in order to be able to create an individual solution which fully exploited the potential of the workshop. The most essential part for Ejner Hessel A/S was to save time in the picking process, save space in the warehouse and improve the general working environment.

The solution therefore ended up being two units of the ClassicMat™ vertical lift module, which is developed and designed to exploit the square metres of the warehouse to its fullest and to optimize the picking speed. ClassicMat™ has a light-weight lift construction and PLC-control, which makes it highly efficient. The two units has a footprint of only 25m2, which yields a significant reduction of the need for floorspace.

By integrating the two systems, Ejner Hessel A/S will be capable of planning a flow of spare parts and hereby gain easier access to the wanted parts. This provides a better overview of the stock account and makes inventory a lot less complicated. Fewer parts can be tied to the warehouse, along with an efficient service still being provided to the customers. 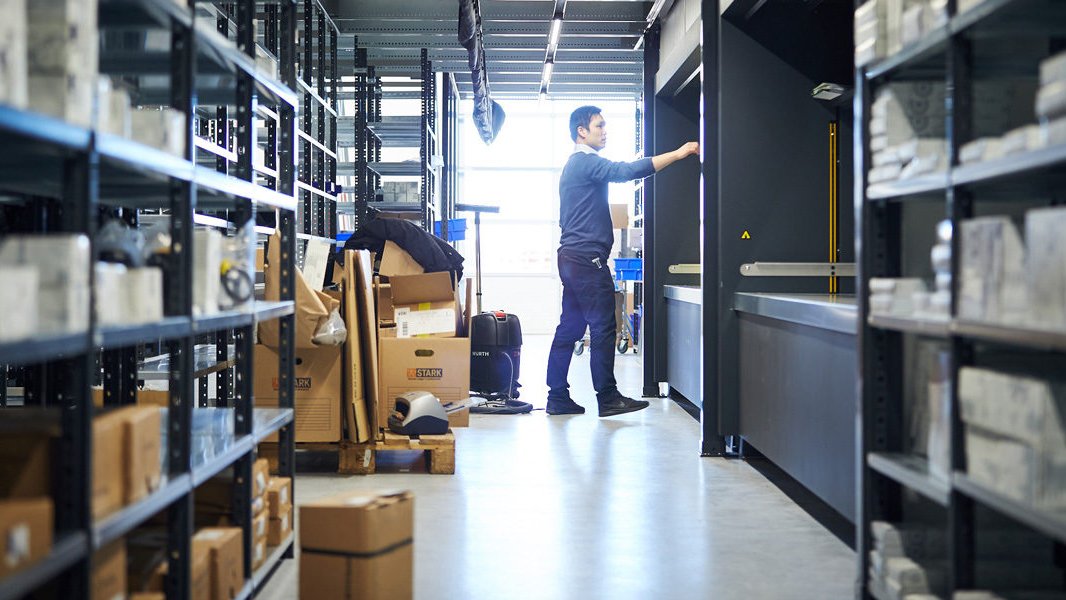 A high-tech front runner with the customer in focus

The 7000m2 large car dealership opened in January 2018 and is impressive with its digital and electronic features – a high tech car dealership that is well equipped for the future.

The wish to be able to render an exceptional customer service was the central part for Ejner Hessel A/S, in the establishment of a car dealership out of the ordinary.
Sandy Falkenberg, the purchasing manager of Ejner Hessel A/S, states the following:

Our new Mercedes-Benz center in Aarhus provides the customers with both a unique service at the workshop and a great experience in the store. The customers will always be able to experience at least 5 top modern AMG models or they can built the exact edition of a Mercedes that fits their needs and experience it projected on the wall in natural size.

The newest technology in the workshop, combined with highly skilled employees, will enable the customer to feel a significant difference. In order to be able to create a “car dealership of the future”, a crucial factor for Ejner Hessel A/S has been to crack the code behind an efficient automation of the storing of spare parts.

The ambition of setting new standards

Ejner Hessel A/S wanted as much space for their showroom as possible and hence the space utilized for storage had to be reduced to an absolute minimum. The tasks at the workshop needed to be executed more efficiently, by having a faster access to the products and the work environment in general also needed to be improved.

The automation of the store of spare parts needed to result in Ejner Hessel A/S being able to redeem their ambitions of a highly efficient workshop, where the benefits would be to grasp for the customers as well, by reducing the amount of time spent and increasing the level of precision.

An efficient and automated repair shop

By utilizing vertical lift modules, Ejner Hessel A/S has found a solution which makes the tasks at the auto repair shop more efficient. The warehouse has become highly comprised, which provides a quick access to the products and the waiting time for the mechanics is markedly reduced.

The picking of the spare parts is happening fast and efficiently within the vertical lift module, when the car is entered into the system and the spare parts are ready at the lift when the mechanics need them. The integration with Autoline also increases the efficiency.

The intelligent integration with our DMS-system makes the tasks at the workshop much more efficient. All the planned service jobs can be prepared the day before, meaning that the spare parts are ready, when the mechanics needs them. If a car is brought in acute, it gets registered in Autoline. The order of spare parts are automatically send further to Effisoft, so the warehouse can pick the necessary spare parts for the workshop. The system is very efficient and provides a short response time

The automation of the store of spare parts increases security and improves the working environment by eliminating the use of ladders and mechanical handling equipment. Furthermore, the storage robots decreases the need for floorspace, up to 85% of floorspace can be saved compared to traditional shelf storage. Ejner Hessel A/S has therefore been able to prioritize the space for their 7000m2 large showroom area.

It is a big and comprehensive decision to automatize ones storage. But an ideal automation will increase the service level significantly and result in economic benefits in terms of reduced costs. Ejner Hessel A/S has passed on the benefits of an automatized warehouse to their customers by being able to provide a better communication between workshop and spare parts department, a reduced amount of time spent and a 99,9% more secure storage control and precision. 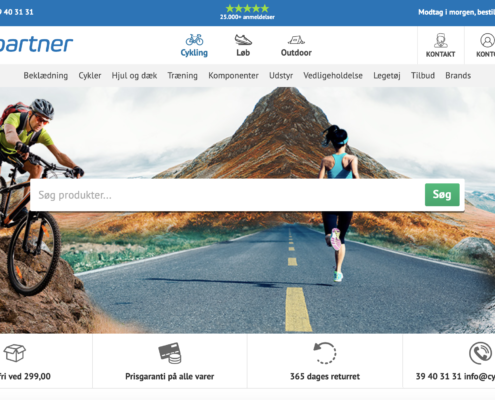 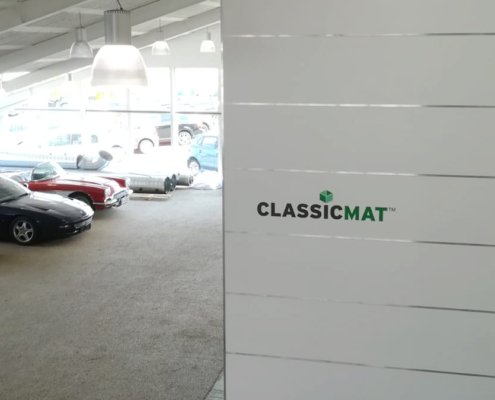